One of the most exciting applications for Red Light Therapy (photobiomodulation therapy, PBMt), is for brain health. There is an ever-expanding emerging evidence base for both cold laser and LED-based PBMt for a range of brain and mental health disorders [1]. 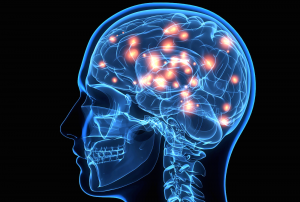 The use of red or near-infrared light has been shown to stimulate, heal, regenerate and protect tissue that has been injured, is degenerating, or else is at risk of dying [2].

The human brain, so vital to life and optimal functioning, suffers so many different disorders that can be classified into three broad groups:

When light is shone onto the head, it is able to penetrate into the skull and is directly absorbed into brain cells. At the cellular level, the light boosts mitochondrial function, the output of nitric oxide and improves blood flow in that location [2] (see Figure 1). 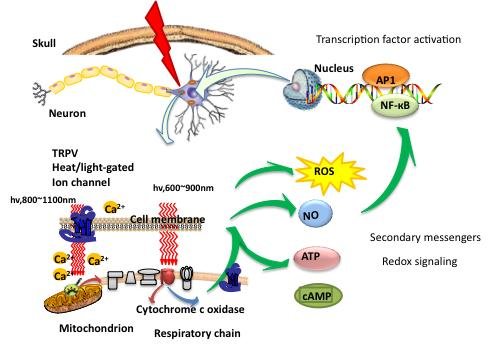 The benefits of these cellular actions are many, and are showing promising improvements for:

For conditions where neurodegeneration occurs (e.g. Parkinson’s, Alzheimer’s), studies are now demonstrating that PBMt is having both a neuroprotective and neurogenerative effect[3].

What is most astounding about this is that no pharmaceutical or any other form of conventional medicine has been able to achieve this. Some researchers are also finding that PBMt interacts with stem cells, to have a regenerative effect where the light is shone [16].

PBMt is painless, non-invasive, and natural, generates no heat and has no adverse or side effects. While there is still further research to be done to determine the precise protocols and dosages that provide optimal benefits, there are many people who are already using PBMt to heal, treat, protect and restore their brains. An example of this is the  “Bucket Heads” from Tasmania, Australia, who were recently featured on ABC’s Catalyst program. A group of people with Parkinson’s who have been wearing LED-lined buckets and are getting amazing results.

Many people are catching on to the use of Red Light Therapy or PBMt to help them enhance their mental performance. Research has found many cognitive enhancing effects of PBMt such as better memory and greater executive function [17,18]. 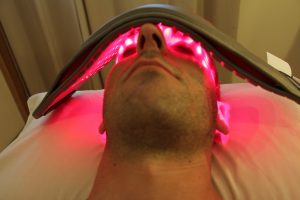 The iLED providing PBMt to the brain via the forehead.

One of the best places to apply an LED-based PBMt device is to the forehead, where penetration of the light is best (no hair, longer wavelength). And while there are many devices currently on the market that are made specifically for brain health, the cost is often prohibitive to most people.

Fortunately, there are devices like those in our CelLED range that can be used safely on the head to enhance the health of your brain, today.